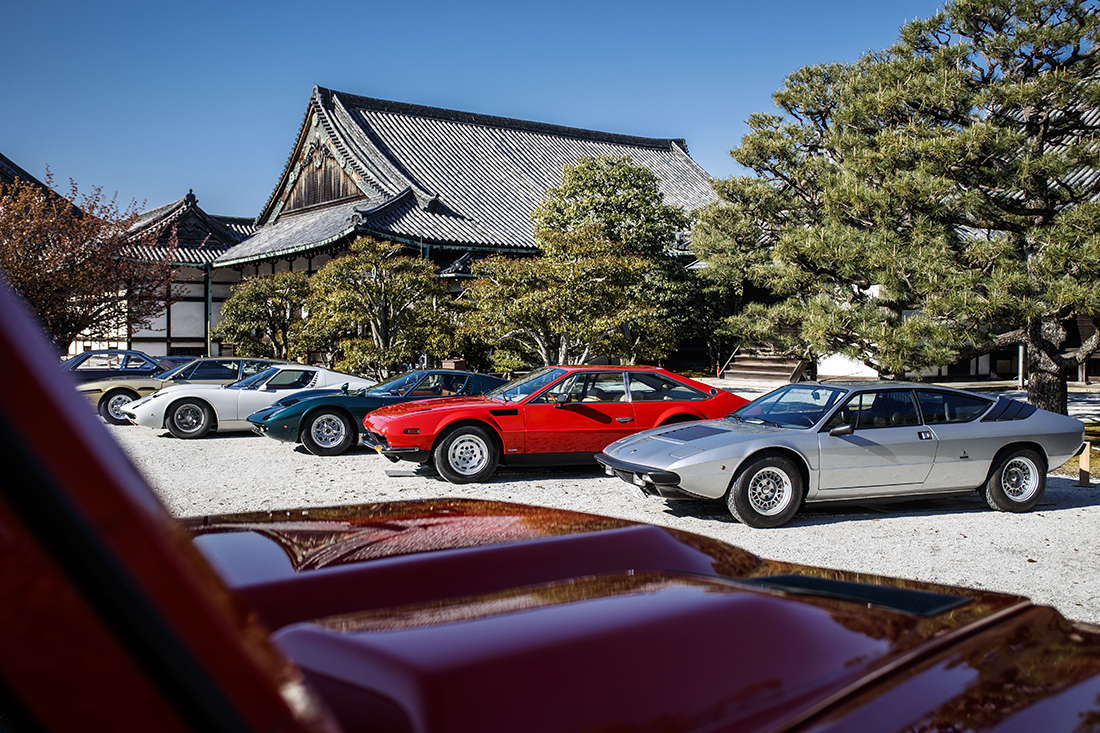 The Concorso d’Eleganza Kyoto may be one the newer events on the world motoring calendar, given that the one held during the 13th and 14th of April this year was only its third edition. But just because it may be relatively young, it does not imply that it would lack enough substance worth taking notice. Moreover in fact, judging by the turnout this time, it has started to earn its recognition as one of the more prominent concours that many from all over have been making increasing effort to attend.

While most of the more established shows in the U.S. and Europe have the advantages of bigger number of entries, longevity, heritage and automobile tradition to woo car enthusiasts and collectors to travel from across the globe and attend annually, it would appear that this Concorso d’Eleganza simply relied on the features that are unique only to this picturesque Japanese city rather than trying to replicate something which are not theirs (wannabe organisers, please take note).

Using the grounds of the majestic Nijo Castle, this World Heritage Site which is over 400 years old served as the perfect venue to showcase the elegance of Japanese culture that somehow blends harmoniously with this year’s theme of celebrating the timeless style of Italian design with the 100th Anniversary of Zagato and the special feature of Lamborghini Polo Storico.

This special showcase of the famous Milanese coachbuilder together with Lamborghini’s in-house department that is intended to preserve and restore the past iconic cars produced from Sant’Agata was another unique feature that made the Concorso a standout from all the others. For it meant that the bulk of the 54 cars in total that were invited comprised of only the rare Zagato-penned cars (such as those from Lancia, Alfa Romeo, Aston Martin, FIAT and Maserati) and those of the very best classic Lamborghinis, to illustrate both companies’ rich history in automotive design and production.

These 54 cars, representing multiple eras from Vintage to Contemporary, were entered for varying classes and to be judged by a Jury Committee led by noted car collector, Corrado Lopresto, as its Chairman. With Sandra Button, who is the Chairman of the Pebble Beach Concours d’Elegance, serving as the President of the Jury, other notable judges included well-known designer Lorenzo Ramaciotti, Christian Philippsen, Honorary Judge of Pebble Beach Concours and the popular Donald Osborne, the Automotive Historian & Appraiser and TV personality from “Jay Leno’s Garage”.

Through the expertise of these esteemed international jury, the coveted “Best of Show” prize of the Concorso d’Eleganza Kyoto 2019 was awarded to the one-off Lamborghini 350 GT by Zagato from 1965. This grand tourer was the winner of the “Race and Prototypes’ category also and since it is one of the cars built by the Carrozzeria Zagato as well, took home the “Best Zagato” Trophy.

As for the “Best Lamborghini”, that honour went to Eizo Tomita’s 1971 Lamborghini Miura SV finished in very fetching Green with Mustard Yellow interior. While an orange Lamborghini Countach LP400 of Hidetoshi Sekiguchi claimed the “CHAPAL Desirable to Drive” prize. To show that the Lamborghini cars did not run away with winning all the classes, another multiple-award winner was a beautiful 1966 Lancia Flaminia Super Sport Zagato, which its proud owner, Akira Harada received Best GT and Best Elegant Closed. In the “People’s Choice” category, as voted by the event’s attendees, that accolade went to an immaculate 1930 Alfa Romeo 6C 1750 GS Zagato of Albert Wetz from Luxembourg while another Alfa, a 1942 6C 2500 S of Belgian Koen Verhaert, grabbed double awards for Best Vintage and Elegant Open.

Aside from being able to get up-close to admire all of these fantastic machines as they are parked sporadically around Nijo Castle, both the visitors and the locals were treated to the delight of getting to see fifteen of these cars—some of which are among the rarest in the world—as they are driven along the scenic routes of Kyoto Prefecture as part of the Tour d’Eleganza.

Given the results that we have seen, the organising team and its Chief Executive Producer, artist Hidemoto Kimura, should be commended for presenting the Concorso d’Eleganza not as another run-of-the-mill classic car show, but a stylish exhibition of motoring as an art form at world-class standards. We cannot wait of what will be in store for 2020.